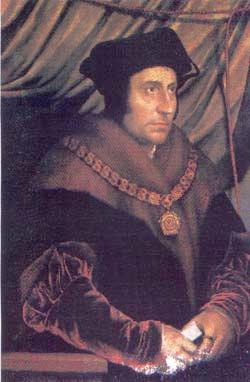 Thomas More was born at Milk Street in the city of London on the 7th of February, 1478, the son of John More who was later a judge of the King's Bench. His education was begun at St. Anthony's School in Broadstreet ward and about 1490 he was received as a page into the household of John Morton, Archbishop of Canterbury, who in 1493 was created cardinal. Here More gave evidence of that gaiety and ready wit which characterized all his life and writings.

Two years later, by Morton's advice, More was sent to Oxford to Canterbury Hall, where he studied the classics and made his first contact with the new learning of which in later years he proved himself one of the most brilliant exponents. In 1494 he was entered as a law student at New Inn and in 1496 transferred to Lincoln's Inn. Having been called to the Bar he was appointed reader at Furnival's Inn; but now he passed through a spiritual crisis.

More, especially after his first meeting with Erasmus in 1497, was drawn on the one hand to the fresh fields of humanism; but he was no less powerfully attracted by the bonds of love to Christ. Accordingly, about 1499, he retired to the London Charterhouse where he lived for some four years, without vows, but in seclusion, seeking through prayer and penance to learn his true vocation. He was at length persuaded by his confessor, Dean Colet, that his proper course lay in the world and as a married man.

In his retreat More reconciled once and for all what he believed was best in the new learning with the ancient doctrine of the Church.

In 1504, having been returned to Parliament, he was instrumental in persuading the Commons to oppose the taxes of Henry VII, who took revenge on More's father with a heavy fine; and More himself was preparing to seek refuge overseas when Henry died in 1509. Thomas More was twice married, first in 1505 to a daughter of John Colt of New Hall in Essex. She bore him three daughters and a son, but died in 1511. In the same year, in order that his home should have a homemaker and his children a mother's care, he married a widow, Alice Middleton, some years his senior. She was a good wife and mother and More a devoted husband and father. His domestic life is one of the most attractive elements of Sir Thomas's character, and Erasmus in a letter to Ulrich von Hutten gives this charming picture of his home:

"There is not any man living so loving to his children as he, and he loveth his old wife as if she were a young maid, and such is the excellency of his temper, that whatsoever happeneth that could not be helped, he loveth it as if nothing could happen more happily. You would say there were in that place Plato's academy, but I do the house injury in comparing it to Plato's academy, wherein there was only disputations of numbers, and geometrical figures, and sometimes of moral and virtues. I should rather call his house a school or university of Christian religion, for there is none therein but readeth or studieth the liberal sciences; their special care is piety and virtue, there is no quarreling or intemperate words heard, none seem idle, which household discipline that worthy gentleman doth not govern by proud and lofty words, but with all kind and courteous benevolence; everybody performeth his duty; yet is there always alacrity; neither is sober mirth anything wanting."

As with his family, so with his friends he was gracious, gentle, and beloved. More had returned to the Bar; his success was immediate, and he was engaged as counsel in every case of importance. The new king, Henry VIII, and the Cardinal Wolsey tried without success to lure him from the law to the royal court and politics. He was, however employed upon a number of foreign embassies, and honors were rapidly heaped upon him. In 1510 he became Under-Sheriff of London; in 1518 Master of Requests and Privy Councillor Knight and Sub-Treasurer to the King in 1521; and in 1523 Speaker of the House of Commons. Amidst all the work which these offices and his own practice entailed Sir Thomas More never relaxed his studies, his literary pursuits in defense of Catholic doctrine, his domestic ties, and least of all his life of prayer. In 1516 he had completed his most famous work, Utopia, which was published the same year under the supervision of Erasmus at Louvain.

We learn from Roper that it was after More's appointment as Chancellor of the Duchy of Lancaster in 1525 that the King began to take a special delight in his company.

"The king's custom was... to send for Sir Thomas into his traverse, and there, sometimes in matters of astronomy, geometry, and divinity, and such other sciences to sit and confer with him; otherwhiles also in the clear nights he would have him walk with him on the leads, here to discourse of the diversity of the courses, motions, and operations of the stars as well fixed as the planets; and because he was of a very pleasant disposition, it pleased his majesty and the queen at supper-time, commonly to call him to hear his pleasant jests." More was now living at Chelsea, and this constant attendance on the King kept him from his family and other obligations. He contrived to evade the royal invitations; but now Henry began to come in person to Chelsea and be merry with him; whither on a time unlooked for, he came and dined at his house, and after dinner walked with him the space of an hour, holding his arm about his neck most lovingly in the garden."

Sir Thomas, however, knew the hearts of men; for being congratulated upon so high an honor, he replied: "I may tell you I have no cause to be proud thereof; for if my head would win him a castle in France, it should not fail to go off." Nor was he deceived by the outward prosperity of the kingdom. I pray God," he said to Roper, "that some of us may not live to see the day in which all this will be changed, and in which we will be glad to be permitted to possess our own churches and our own religion in peace.

In 1529 Anne Boleyn won the disgrace of Wolsey from her infatuated paramour; and now Sir Thomas More was chosen to succeed the Cardinal as Lord High Chancellor of England. He proved himself one of the best in an illustrious line of men who have occupied the woolsack. Not only did he clear the large arrears of causes left unheard by his predecessor, but he also, three centuries before it came to pass, attempted the fusion of common law and equity. So long as the case of the divorce was undetermined by the Holy See, Sir Thomas More continued in the service of his King. But as soon as it became clear that Rome would not accede to the royal lust, he had to choose between Christ and the world. The issue was never for a moment in doubt. "We may not look at our pleasure," he had declared "to go to heaven in feather beds, it is not the way. For our Lord Himself went thither with great pain, and by many tribulations, which is the path wherein He walked thither, and the servant may not look to be in better case than his master." He asked to be relieved of his office, and his resignation was accepted in 1532. He abandoned honors and dignities with more readiness than other men embrace them, and retired to Chelsea, his family, his books, and communion with God.

The King had decreed his own divorce by the mouth of Cranmer, and More had refused the royal command to be present at the coronation of the adultress. Henry next claimed to be head of the Church in England and denied the Roman jurisdiction. This was schism, total separation from the body of the Catholic Church; yet it was ratified by Parliament without a dissenting voice, and to declare a contrary opinion was made high treason. For Sir Thomas More the supreme crisis was at hand. The Oath of the royal supremacy was tendered to the clergy, and all but the Bishop of Rochester and the monks of the Charter-house submitted. It was considered that if More should take the oath, such was his prestige, none other of the laity would refuse. Accordingly, on the 13th of April, he was commanded to appear at Lambeth. As was his custom, he went to Chelsea Church where he confessed, heard Mass, and received Communion. The path before him was clear, but it was not easy, and his son-in-law, who accompanied him, tells us that he left home with a heavy heart. He sat for a long while silent in the boat, and then at last he spoke: "My son, I thank our Lord that the field is won."

Twice he refused to deny his Master. After four days he was once more summoned to abjure the ancient faith; once more he refused, and was committed to the Tower. Here, alone with Christ, he awaited the fulfillment of God's will.

More had occupied much of his time writing the Dialogue of Comfort Against Tribulation. The dialogue, like the introduction to Utopia, is a personal revelation.

And now Henry ordered that he should be deprived of books and writing materials. The solicitor-general, moreover, one Rich, visited him and tried to ensnare him into treasonable utterance. It was in vain; but his enemies determined to proceed against him by means of perjury and a carefully selected jury.

The trial of Sir Thomas More opened at Westminster Hall on the 7th of May 1535, but was adjourned and resumed on the 1st of July. So futile was the case against him and so conclusive his defense that an acquittal seemed inevitable. At this juncture Rich left his place as Crown Counsel at the Bar, entered the witness box, and swore on oath that the accused had uttered treasonable words. More preserved his calm and dignity, saying only: "In truth, Mr. Rich, I am more sorry for your perjury than for my peril." He was sentenced to be hanged, drawn, and quartered, but according to the custom for men of his rank, the sentence was commuted to death by beheading.

Early next morning, the 6th of July, More was brought to execution. His imprisonment had weakened him and the scaffold had been hastily built. "Assist me up," he said to the Lieutenant of the Tower, "and in coming down I will shift for myself." When his head was already on the block he uttered one of the most famous of all his sayings: "Wait till I put my beard aside, for that hath done no treason."

Thomas More was beatified in 1886, canonized a Saint of the Holy Catholic Church in 1935, and is greatly respected by attorneys and fathers of families as a good and quiet man whose life and conduct are most worthy of emulation.